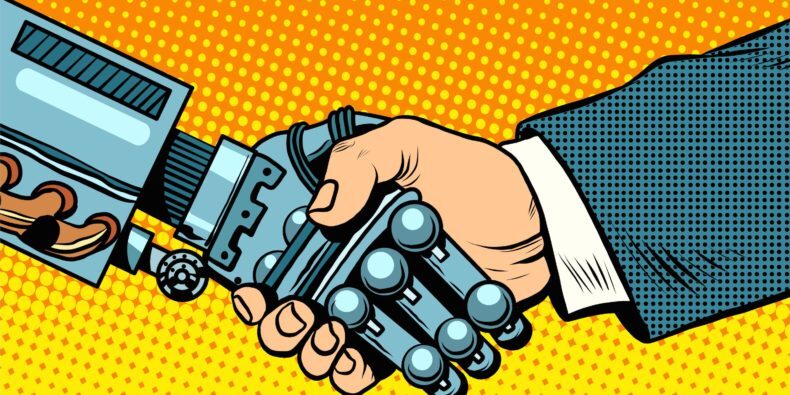 There is always fear of skills obsolescence especially amongst us humans when a new technology ushers in change. We have in fact an inherent fear of change. We are objects of comfort. We are pilgrims of Nirvana, although many of us never get there.

Although the ushering of robotics and its attendant machine automation in the past decades has been hailed as an advance in human-machine interface engineering, there has always been a latent inertia to its full potential – especially amongst humans. The fear is job losses and being replaced by robots. Is this fear justified? Yes it is, and might be. But does this fear sustain the march towards progress? Perhaps it delays it, but eventually progress triumphs. The world is replete with human fears of obsolescence as progress marches in. From the cowboys of the US Wild West, the Samurais of Japan, the nomads of Africa, the Inuit’s of the Arctic world, and many more cultural artefacts have had to adapt to change in order to remain relevant and sustainable in their environments.

The Kobayashi 20 Keys system of workplace improvement, commonly known as PPORF – Practical Program Of Revolutions (1) in Factories is a system of a multi-pronged change that affects both humans and machines they use to perform work (making work easier, faster, and cheaper as the fundamental objectives). Almost every key has a huge potential for change in human behaviour as well as in machine efficiency. Be that as it may, there is always fear that such a change might lead to job redundancy and thus triggers reluctance to perform at maximum efficiency to think out of the box and introduce innovative solutions. This is no more relevant than in manufacturing and mining operations where rising cost of production have resulted in job cuts, amid resistance from worker organisations such as unions across the board of workforce strata – from shop-floor to management. The fear of job losses is real, but other companies have marched ahead with new changes in response to the challenges brought in by uncontrollable factors such as

The Kawada Industries Inc.: From Aviation to Robotics

In the late 2000’s, there was a worldwide economic downturn in the aviation and aerospace industry which forced a lot of companies to downsize or close shops. One of the companies faced with this dilemma was the Aviation division of Kawada Industries Inc. now Kawada Robotics Corp. based in Tokyo, Japan.

The General Manager of the Aviation division, Tadahiro Kawada, called upon all employees and informed them that the company would close down this division, and explained the reasons, which were there in the open and gracing media reports almost daily. The biggest question on all employees minds as well as in Tadahiro was, ‘do we close the division entirely, or do we do something to save jobs, and if the latter, then do what?’ As Tadahiro puts it “I sat down with them to discuss “what do we do now?”  After discussions, we agreed to go after engineering/development works of any kind.” (2) In South African business strategy lingua, Kawada Industries convened a “bosberaad” to discuss the critical situation the company found itself, and co-determined the strategy of going forward, saving some jobs and at the same time taking the division towards another business trajectory. The company started taking R&D/development jobs with its panel of in-house skills – engineers (Kobayashi’s Key 20: Site technology) and did almost whatever that came out its way such as

The new division was renamed Robotics and became famous in a small community and that led to a humanoid robot job by University of Tokyo.

From the 20 Keys parlance, the Aviation division’s site technology skills comprised of engineering skills in aircraft manufacturing – lightweight structures, many degrees of freedom system, electro-magnetic interference, vibration, etc. These were the exact skills needed to design and construct humanoid robots, which is now the backbone of Kawada Robotics Corp.

This organisational transformation did not go on without pain. As Tadahiro, the division’s GM puts it, “There were employees that decided to quit after we announced the end of helicopter business.  We could not of course stop them from leaving, but basically, we retained as many as possible.  Also, we did and still have a helicopter operator company.  So, some of our team members were re-located to that company.“ (3)

I asked Tadahiro to share with us the lesson he learnt during this business transformation, and he put it succinctly to 4 things, namely

The collaborative innovative thinking of the joint effort by management and employees of Kawada’s Aviation to retain essential skills, retrain and divert their skills to humanoid robotic research and development has paid off for the Kawada Group. For example, NEXTAGE (4) is a humanoid “developed under the concept that robots can coexist with people, built as an industrial robot that is aimed to increase productivity and safety and manufacturing sites. It is a versatile robot that can recognise its surroundings and workpieces, ﬁt for high-mix manufacturing.”

This story, paraphrased, was related to me personally by my friend and class-mate with whom I studied mechanical engineering, Tadahiro Kawada.

The Kawada Robotics Corp case study is instructive to our industries as we begin to ride the waves of the 4th Industrial Revolution tsunami. We shall be faced with difficult and seemingly insurmountable decisions, but we need to remember that such is an integral part of growth, through which we have navigated from birth to our current state of continuous growth.

The challenges facing 20 Keys practitioners would be the high cost of implementing ‘Kaizen-ed’ operations (Key 6) and other supporting business process engineering initiatives. My view is that it is not such a daunting task as it seems. The government of South Africa is very passionate about innovation and skills development and has developed over the years, a suite of grant incentives such as INSETA training (Key 15: Skills versatility and cross-training) as well as innovation incentives. The few are discussed below to illustrate my point that we need to do business unusual and think out of a ‘proverbial’ box.

Support Programme for Industrial Innovation (SPII) (5) promote technology development in South Africa’s industry, through the provision of financial assistance for the development of innovative products and/or processes. SPII is focussed specifically on the development phase, which begins at the conclusion of basic research and ends at the point when a pre-production prototype has been produced.

SEDA Technology Transfer program (Stp) (6) provides a range of services that promote entrepreneurship in industry, particularly in enabling small enterprises to access appropriate technology to become more competitive and grow their businesses. The services include:

Manufacturing Competitiveness Enhancement Program (7) support scheme which offers manufacturing companies incentives to raise their competitiveness and retain jobs. It has a budget of R5.8-billion over a three-year period.

There are many other incentive programs provided by the government of South Africa through the departments of Trade and Industry, and Science and Technology.

In conclusion, do we really have a substantial and solid argument against fear of change because of job losses or are we are afraid to think out of a box? Perhaps the Kawada Inc.’s approach might help accelerate in changing our paradigm.